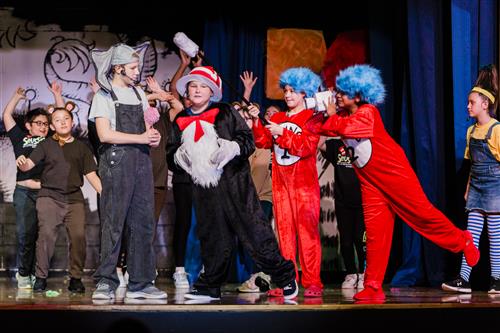 The Elementary Drama Club will present “Seussical Jr.” on November 4 and 5.

This year's cast was made up of 65 fourth, fifth and sixth graders that worked extra hard to showcase their singing, dancing and acting talents on stage. The cast auditioned in September to be a part of the long-standing theater tradition.

“Seussical Jr.” is a musical adaptation of the books written by Dr. Seuss. Some of the characters that were seen on stage included Jojo played by Neveah Issac, The Cat in the Hat played by Lukas Dziuba, Horton the Elephant played by Carter Lovecchio, Gertrude McFuzz played by Aaliyah Hollenbeck, Mazie LaBird played by Margaret Kozlowski, Mr. Mayor the mayor of Whoville played by Kaden Miner and Mrs. Mayor played by Alexandria White.

The musical is a silly and heartwarming story about Horton the Elephant and his love for all creatures, large and small. He reminds us all that “a person’s a person, no matter how small.”

Congratulations to the cast and crew on an amazing performance!